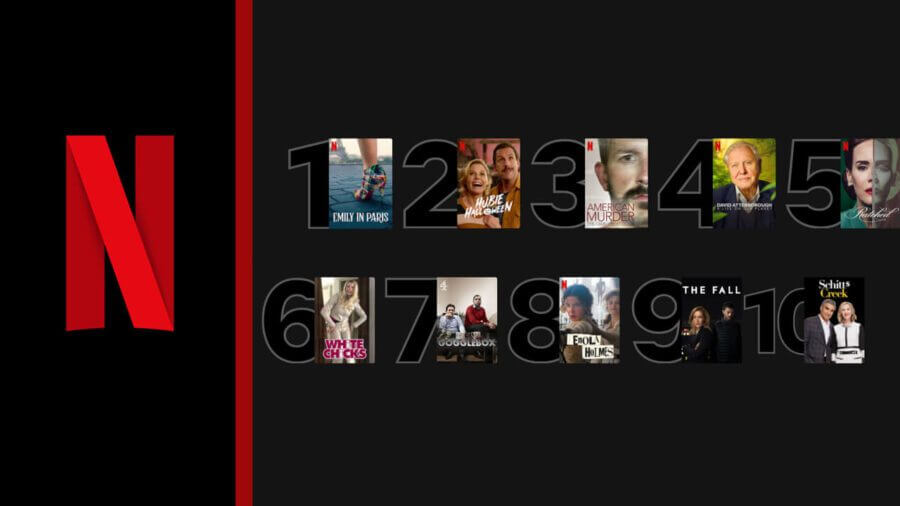 Netflix’s top 10 feature was launched at the end of February 2020 in more than 100 countries after a few months of testing in the UK and Mexico. What looked like another list in the user interface to make your decision harder, it has evolved into one of the most discussed features so far. Here are 10 observations we’ve made since the new feature was launched.

Beyond hand-selected stats from Netflix themselves (that are contentious as they only measure the first 2 minutes of watching), we can see a glimpse of what is really popular on Netflix. And it’s the closest thing to Netflix’s official viewing numbers we have for now. After 6 months of watching the results, some really interesting facts came up. Let’s dig into the most important ones.

Disclaimer: All calculations are based on the analysis of Netflix TOP 10 features on daily basis. For every stats, we used the really simple metric: Title on #1 spot has 10 points, title on #2 spot has 9 points, etc. This allows us to see trends over time.

However, it does not show us exact viewership numbers in a specific country, nor is it endorsed or confirmed by Netflix. And of course, it’s based on the fact that the TOP 10 feature is another Netflix data that is not validated by any third-party company.

You probably have read about this movie a lot in 2020. Sadly, we’re here to talk about it once again.

When it comes to the outright number of points attained worldwide, 365 Days is the most popular title in Netflix TOP 100 and it has almost 3x more points than the second title, which is The Old Guard. Nobody could’ve predicted just how big 365 Days was going to be during the lockdown.

Tiger King was a spring phenomenon but widely only in the US (we’ll talk about that in a second). Over most of the summer, The Umbrella Academy season 2 carried the top global TV accolade until Lucifer came along.

Sneaking in at third place is one show that did well all around the world which is Dark Desire (aka 365 Days in TV show format) in the 3rd place.

The biggest 1st month opening of the year is…again.. 365 days

As we mentioned, when Netflix shares its 2-minute viewing data, it is often for the first month so let’s apply that to the top 10s for the first opening month of every new title.

Unsurprisingly, you will find there a lot of familiar faces there.

The biggest 1st day opening of the year is Enola Holmes

Let’s now wind down the time period and take a look at what title had the biggest single day opening. It’s the closest we can get to an “opening weekend”.

Enola Holmes takes the crown by a considerable mile.

The title that achieved global domination this year is Enola Holmes

Newcomer Enola Holmes has rewritten another record in the past few weeks. To be able to capture the #1 spot in as many countries as possible.

The longest streak at number 1 365 Days

Speed is not everything, so let’s look at how well are titles able to hold the #1 position in time even when new releases are coming every day. Based on the points around the world, 365 Days was able to hold 39 days on #1 global ranking. Yes, over a month.

Netflix’s top 10 tends to be dominated by relatively new releases whether it’s brand new shows and movies or relicensed titles. The titles in this list are mainly TV series with exceptional TV fanbases who tend to watch their favorite titles over and over again.

Let’s dive more into the national charts to explore different tastes around the world.

Yes, Netflix originals like Spenser Confidential or Extraction were huge hits, but titles that performed particularly well in the US are licensed titles.

Tiger King took over the US unlike anything else but around the world, it differed massively.

And there you have it, some insights from Netflix’s top 10 feature. You can find a daily look at what’s hot around the world via our most popular on Netflix hub.

Netflix Anime Prequel ‘Army of the Dead: Lost Vegas’: Everything We Know So Far