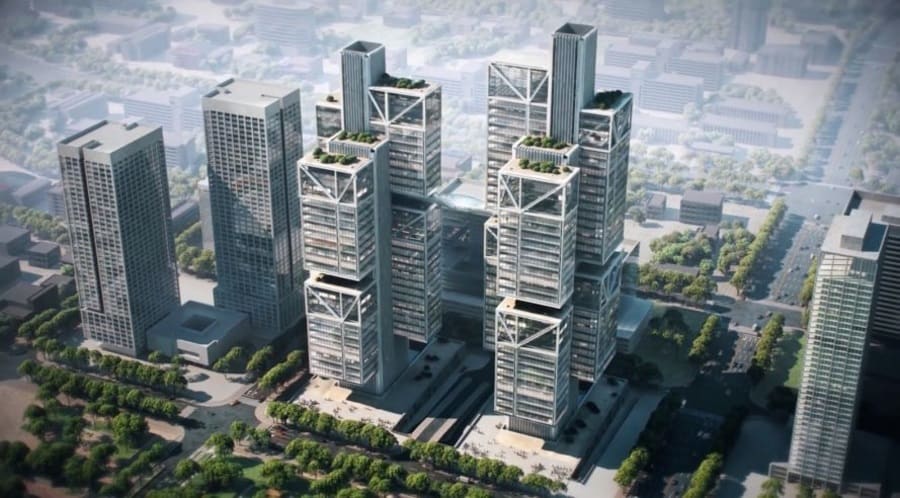 See, DJI is very focused on building high-quality drones that would stand the test of time, at least regarding the foreseeable future, hence the need to have an advanced, state-of-the-art headquarters. Their new headquarters is supposed to be built in Shenzhen, China. And, they’ve picked a highly qualified architectural firm to build this monstrosity – Foster & Partners. Now, back to the skybridge. What purpose will it serve and why even include it when you can just walk from one tower to the next? DJI has an answer – they need the skybridge to show off their ‘fresh-out-of-the-oven’ drones. The other reason is connecting the two towers (guess which is more important to them).

The headquarters is set to act as a “floating community in the sky” with virtually everything for the employees and drones. Oh, there’s also supposed to be a new theater which would serve as a location for new product launches. According to the Head of Studio at Foster & Partners, Grant Brooker, the firm is happy to be a part of DJI’s new world. He said, “Our aim is to create a unique environment that embodies the spirit of invention and innovation that has allowed DJI to lead the world in robotics and technology”. There’s no doubt that this veteran architecture firm will deliver everything that DJI asked for, and probably even more… up to the point of amazing the entire globe.

For those who are just now getting their heads into the world of drones, DJI is one of the biggest, if not the biggest drone companies in the world. Global Consumer Insights have reported that the drone market will be worth over $17 billion by the end of 2023. On the other hand, according to Reuters, DJI controls around 70% of the drone market.

One of their most recent projects and releases is the DJI Mavic Air, one of the most advanced drones in the world right now. It’s fairly evident that they’re looking to expand even further and improve their departments so the drones in plan for the future will be of the highest quality possible.