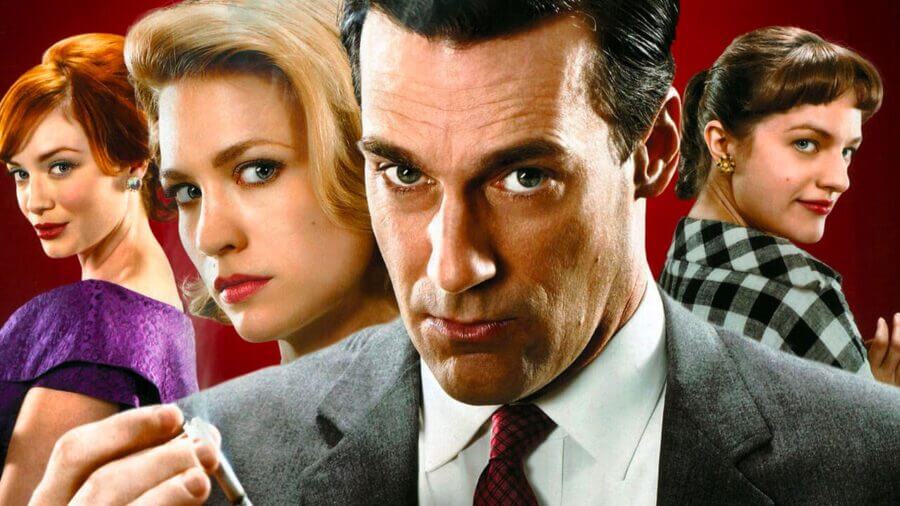 Sad news: period classic Mad Men is leaving Netflix in early June 2020. This sweeping ensemble piece follows the lives of those tangled up in a hedonistic New York advertising agency. Airing from 2007-2015, the show has had a home on Netflix since 2015. But, not for much longer.

We know it won’t really ease the pain, but if you want to know where to find your favorite Mad Men actors on Netflix, here they are…

The show’s protagonist: smooth-operating advertising executive, Donald Draper. Despite his womanizing, boozing, and all-round bad behavior, you can’t help but fall for him. Underneath that perfectly-suited exterior, this Korean War vet has got some dark secrets.

Don may be the protagonist, but Peggy is the true hero of Mad Men. She arrives at Sterling-Cooper as a fresh-faced nineteen-year-old, straight out of Miss Deaver’s secretarial school. Discontent with her role as a secretary, Peggy overcomes near-constant sexism and setbacks to become the first female copywriter at the agency. As her career and character develop, so does her wardrobe.

Elisabeth Moss’s biggest role on Netflix US at the moment is the female lead in arty thriller, The One I Love (2014). She plays opposite Mark Duplass as a couple trying to resurrect their marriage. Moss also stars in Get Him To The Greek as Aaron Green’s (Jonah Hill) girlfriend.

UK fans can watch Elisabeth Moss in one of her most notable appearances: Detective Robin Griffin in Top Of The Lake (2013). They can also enjoy one of Moss’s earliest performances. Aged sixteen, she played schizophrenic burns victim, Polly, in the 1999 classic Girl, Interrupted.

His name may be on the lobby, but Roger Sterling is much more interested in partying and pretty women than he’s ever been in advertising. Despite his (many) flaws, there’s still something lovable about this snowy-haired, aging ad-man.

You can see John Slattery alongside his Mad Men co-star Jon Hamm in Wet Hot American Summer: First Day Of Camp. Netflix subscribers in the UK can also catch him in media biopic, Spotlight (2015).

Joan is the Queen Bee at Sterling Cooper: the firm literally cannot operate without her. Of course, her beauty and femininity mean her intelligence and business acumen are completely overlooked. She is the long-term love interest of Roger Sterling and something of a mentor for Peggy.

Outside of the Originals, Hendricks plays Connie Greiger in whimsical Christmas movie, Pottersville.

Throughout Mad Men, we catch glimpses of the human side to up-and-coming account manager, Pete Campbell. Overall, though, he’s a sycophantic slimeball who’ll do anything to come out on top.

Don’s beautiful but aloof wife. Their relationship is undeniably toxic, but there’s something extremely compelling about them as a couple.

It may have been cancelled after one season, but you can catch January Jones as pushy skate-mom in the 2020 figure skating drama, Spinning Out. She also has a small role in the heist drama-comedy, Bandits (2001).

UK subscribers can see her in the third instalment of the American Pie franchise, American Wedding (2001). Jones plays Cadence Flaherty, love interest of Stifler and Finch.

Joining the cast in season three as the firm’s financial controller, Lane quickly ends up in a selection of sticky spots. He’s not a bad guy but regularly exercises questionable judgement.

The sassy daughter of Don and Betty Draper. She’s a good girl, but her parents’ tumultuous relationship leaves her understandably troubled.

Still only twenty years old, Kiernan Shipka recently starred in the titular role of the Netflix reboot, The Chilling Adventures of Sabrina (2018-present). You can also catch her in the horror The Silence, and Christmas movie Let it Snow (both 2019 Netflix Originals).

What will you be watching when Mad Men leaves Netflix on June 9th? Let us know in the comments.

Four Kids and It

Max Reload and the Nether Blasters

The Sims 4 Eco Lifestyle: Controlling Your Neighborhood with N.A.P. Feature

The Sims 4 Eco Lifestyle: Everything added in Create A Sim! Video Overview

The Sims 4 Console is getting improved Controls User Interface