A Slovenian man convicted of authoring the destructive and once-prolific Mariposa botnet and running the infamous Darkode cybercrime forum has been arrested in Germany on request from prosecutors in the United States, who’ve recently re-indicted him on related charges.

NiceHash CTO Matjaž “Iserdo” Škorjanc, as pictured on the front page of a recent edition of the Slovenian daily Delo.si, is being held by German authorities on a US arrest warrant for operating the destructive “Mariposa” botnet and founding the infamous Darkode cybercrime forum.

In December 2013, a Slovenian court sentenced Škorjanc to four years and ten months in prison for creating the malware that powered the ‘Mariposa‘ botnet. Spanish for “Butterfly,” Mariposa was a potent crime machine first spotted in 2008. Very soon after its inception, Mariposa was estimated to have infected more than 1 million hacked computers — making it one of the largest botnets ever created.

An advertisement for the ButterFly Bot.

Škorjanc and his hacker handle Iserdo were initially named in a Justice Department indictment from 2011 (PDF) along with two other men who allegedly wrote and sold the Mariposa botnet code. But in June 2019, the DOJ unsealed an updated indictment (PDF) naming Škorjanc, the original two other defendants, and a fourth man (from the United States) in a conspiracy to make and market Mariposa and to run the Darkode crime forum.

More recently, Škorjanc served as chief technology officer at NiceHash, a Slovenian company that lets users sell their computing power to help others mine virtual currencies like bitcoin. In December 2017, approximately USD $52 million worth of bitcoin mysteriously disappeared from the coffers of NiceHash. Slovenian police are reportedly still investigating that incident. 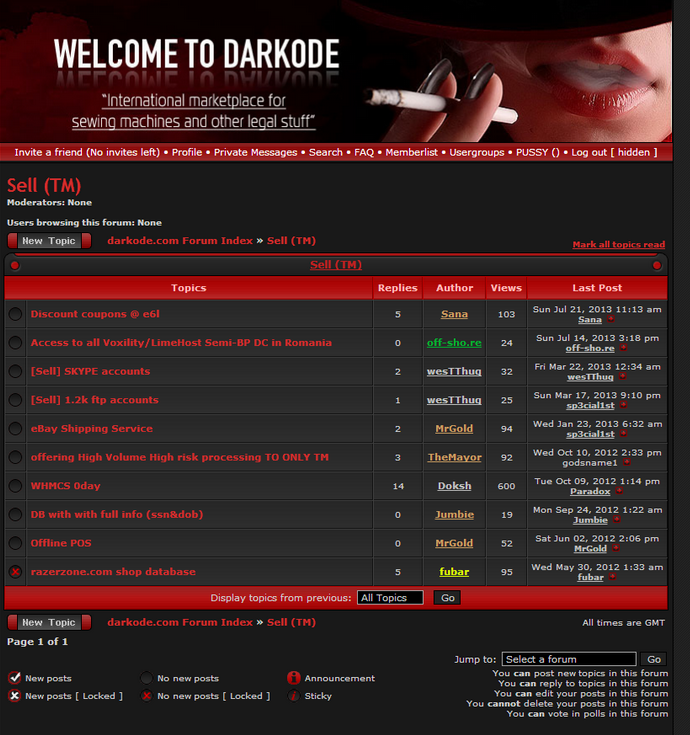 The “sellers” page on the Darkode cybercrime forum, circa 2013.

It will be interesting to see what happens with the fourth and sole U.S.-based defendant added in the latest DOJ charges — Thomas K. McCormick, a.k.a “fubar” — allegedly one of the last administrators of Darkode. Prosecutors say McCormick also was a reseller of the Mariposa botnet, the ZeuS banking trojan, and a bot malware he allegedly helped create called “Ngrbot.”

Between 2010 and 2013, Fubar would randomly chat me up on instant messenger apropos of nothing to trade information about the latest goings-on in the malware and cybercrime forum scene.

Fubar frequently knew before anyone else about upcoming improvements to or new features of ZeuS, and discussed at length his interactions with Iserdo/Škorjanc. Every so often, I would reach out to Fubar to see if he could convince one of his forum members to call off an attack against KrebsOnSecurity.com, an activity that had become something of a rite of passage for new Darkode members.

On Dec. 5, 2013, federal investigators visited McCormick at his University of Massachusetts dorm room. According to a memo filed by FBI agents investigating the case, in that interview McCormick acknowledged using the “fubar” identity on Darkode, but said he’d quit the whole forum scene years ago, and that he’d even interned at Microsoft for several summers and at Cisco for one summer.

A subsequent search warrant executed on his dorm room revealed multiple removable drives that held tens of thousands of stolen credit card records. For whatever reason, however, McCormick wasn’t arrested or charged until December 2018.

According to the FBI, back in that December 2013 interview McCormick voluntarily told them a great deal about his various businesses and online personas. He also apparently told investigators he talked with KrebsOnSecurity quite a bit, and that he’d tipped me off to some important developments in the malware scene. For example:

Read more of the FBI’s interview with McCormick here (PDF).


This entry was posted on Tuesday, October 1st, 2019 at 12:33 pm and is filed under Ne’er-Do-Well News.
You can follow any comments to this entry through the RSS 2.0 feed.